World class actors bring their finest to the action-packed, true-to-life, thrill-filled Fish Man Gets His Chicken – filmed in the deepest wilds of South America!

A Thrilling Tale of Adventure, Love, and Redemption!

A scientific expedition traveling up the Amazon River to recover fossils is watched and attacked by Fish Man, a horrible creature, half man, half fish, who lives there.

Through acts of kindness, Fish Man is rescued from his slimy and fetid existence. Civilized, and with a doctoral degree from a famous university, his life is changed.

He learns the arts of brewing and barbecuing.

For $5.00 and a box top, you may receive this lovely secular holiday greeting card to send to your friends and family.

When this hat came out in Knitty, I just knew I had to make it.

The eyes in the pattern are made of felt and stitched in place. I decided to knit mine up, and did so as below, using needles a size or two smaller.

Cast on 4 stitches. Knit front and back of each stitch – 8 stitches. Transfer to double point needles, place marker at round beginning.

3 thoughts on “Fish Man Gets His Chicken: The Movie”

This site uses Akismet to reduce spam. Learn how your comment data is processed. 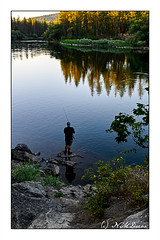 A Quilt and a Piece

A Quilt and a Piece